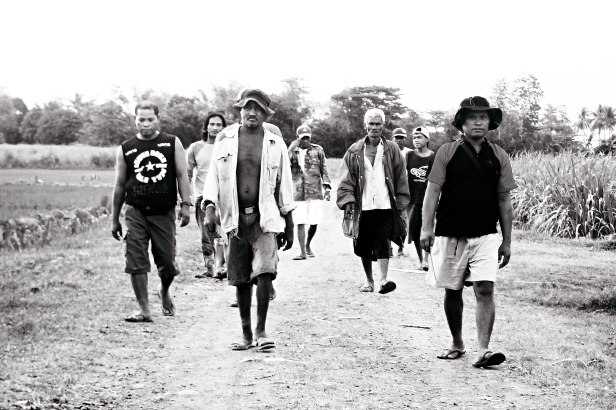 Thousands of sugarcane workers in the Philippines province of Negros Occidental are facing hunger, catastrophic weather changes, and an economy in collapse.

They call it tiempo muerto or ‘dead season’, the time between planting and harvesting when there’s no work in the cane fields.For as long as they can remember, this yearly occurrence has stretched from April to September. This year, the season may never end.

To both dumaan, the resident farm workers and the sacada, the seasonal ones, this means lean times for their families—a situation they have endured for generations. The locals refer to this as tingkiriwi, or pain, and tinggulutom, a time of hunger.

There are around 300,000 sugar workers on the island of Negros, providing for almost two million dependents. On average, a sugarcane worker earns a little over $3 US a day, less than half of the government mandated minimum wage. A seasonal worker earns roughly $2.

Global forces are putting pressure on the sugar industry, and jobs are becoming even more scarce. Landowners have started exploiting entire families through a system called pakyaw. The system employs a group of workers (including children) for farm tasks in a specific number of hectares in the haciendero’s plantation. The pakyaw system earns them roughly $1 a day. But as they see it, low paid work is better than no work at all.

The situation is different during tiempo muerto, when all work stops for four to six months. The resident farmworkers live on cash advances deducted from their salaries when work resumes, but those who are not regularly employed by their hacienderos either make their way to the coast or cities to try and get temporary work, such as in their landlords’ houses as domestic help. Others turn to loan sharks.

From the late 1700s till the early 1970s, when the Negros sugar industry was still thriving, landlords provided for the peasant families in their plantations, often supplying them with rice and deducting the cost from their earnings come work season. Now that the landscape has changed, the sugar workers are left to fend for themselves.

Teroy is one of the hacienda workers, born into a family that has worked in the sugar fields for generations. His family used to be resident farm workers of Hacienda Maria Cecilia until they benefitted from the government’s land reform program and struggled to claim the land they rightfully owned.

Under the government’s Comprehensive Agrarian Reform Program (CARP), all lands exceeding 7 hectares were bought by the government and sold to the landless farmers who pay for it in installments over 15 years. Many of the land-owning elite refused to give up their property and in their resistance to comply, employed violent tactics against workers’ groups. This included using goons to intimidate or trick workers to lease back their land to the landlords in return for lower prices.

According to Teroy, his association was one of the few who has successfully implemented land reform with the workers collectively managing their property. His elder brother, Potot, was killed fighting to maintain and cultivate their land as nearby landlords pressure the association to succumb into lease back scheme.

A few days before I arrived at the hacienda, Teroy survived an attempt on his life when a man riding a motorcycle drove by his house and open fire at him. The workers suspect that the gunman was employed by landlords attempting to crush their association. Teroy continues his brother’s legacy as he leads his fellow workers to another fight – survival.

Despite the difficulties, Teroy doesn’t want to leave. “I have never dreamed of leaving this land despite the hardship and violence,” he said. “Our forefathers have toiled on this land with sweat and blood. Why would I leave it when it is finally ours?” “We are durable and sturdy like the sugar canes. For generations, we have survived the dead season even when abandoned by our landlords.” Teroy

For the Negros elite, sugar was a passport to the good life, right up until the 70s. The sugar industry, which was once a pillar of the Philippine economy, spawned a culture of privilege among hacienderos. Even when sugar prices fell in the early 1980s, which caused a tremendous effect on the island, the hacienderos held on to the illusion of grandeur.

However, for the poor peasants and sugar workers like Teroy, the ever widening gap between the rich and the poor fueled discontent. The oppressive feudal relations in Negros coupled with the implementation of the government’s Comprehensive Agrarian Reform Program (CARP) nourished the struggle between the landlords and the peasants.

For years, the island witnessed bloodshed as private armies employed by hacienderos refusing to comply with agrarian reform prevented farmers to claim what is rightfully theirs. Many of the poor joined the communist insurgency in the countryside. Others like Teroy joined organized workers groups to fight for their rights.

In the tiempo muerto season of 1985, an all time low sugar price coincided with a prolonged drought to cause widespread poverty and hunger. This brought international attention to the Batang Negros (Children of Negros), exemplified by a cover story in the Asiaweek Magazine. The cover depicted a child suffering from extreme malnutrition that plague the island. That same situation looms over Negros today.

The Philippine sugar industry has been continuously ailing. The island’s dependence on the product has been as unwavering as the landowners’ addiction to the good life. Unfortunately, the Negros poor are not immune to the industry’s ills. In fact, the disease of the industry has spread exponentially over the years, affecting all sectors. Attempts to cure or find a vaccine have thus far failed.

According to a recent Philippine Center for Investigative Journalism report, the influx of cheap imported sugar will lead to the decline in the production of local sugar. This is the reality even the Sugar Regulatory Administration chief, Gina Martin-Bautista, and the power circle of politicians—members of haciendero clans elected into local and national positions known as the sugar bloc can do nothing about.

The efforts aimed at softening this blow to the sugar industry range from shifting to other high yielding crops or planting ornamental flowers, to converting sugar lands into prawn or fish ponds. However, the quick fixes are yet to make significant gains the Negros economy. Those who stood still in continuing sugar production have to deal with the effect of land reform.

Studies have shown that since sugarcane is harvested only once a year, a sugar planter may need at the very least ten hectares to be able to support his family’s needs. It is another story for peasants and sugar workers who won one to 1.5 hectares through land reform. They would need more than the land they own to survive.

The bad news doesn’t end there. The state weather bureau is predicting a repeat of super storms like Typhoon Haiyan, but also of drier conditions and decreased rainfall as a possible El Nino develops this June, perhaps lasting until 2015. The El Nino effect will hit the agriculture sector tremendously, making the situation worse for people of Negros already enduring the hardships of the dead season.

Making things worse is the impending implementation of the Association of Southeast Asian Nations Fair Trade Agreement (AFTA) in 2015, reducing tariffs on sugar by five to zero percent. When this happens, the Negros sugar industry—which has failed to instill reforms and innovations—may not be able to compete and may eventually collapse. Thailand, the second largest exporter of sugar, is just on the Philippines’ doorstep, waiting to knock out the terminally ill industry.

As sugar planters, millers, traders, and government scamper to prepare for the tough times ahead, no one quite knows what will happen in the long term. The hacienderos may survive the wounds on their economic power. For thousands of families of the poor sugar workers like Teroy who continue to work the sugar fields of Negros, unaware that this year’s tiempo muerto may not end, this may actually be the prelude to the apocalypse in their land of sweet sorrow.

*This articled was published at http://munchies.vice.com/articles/filipino-sugarcane-workers-are-nearly-the-walking-dead/ last June 19, 2014. It was the first article I wrote for VICE Media.